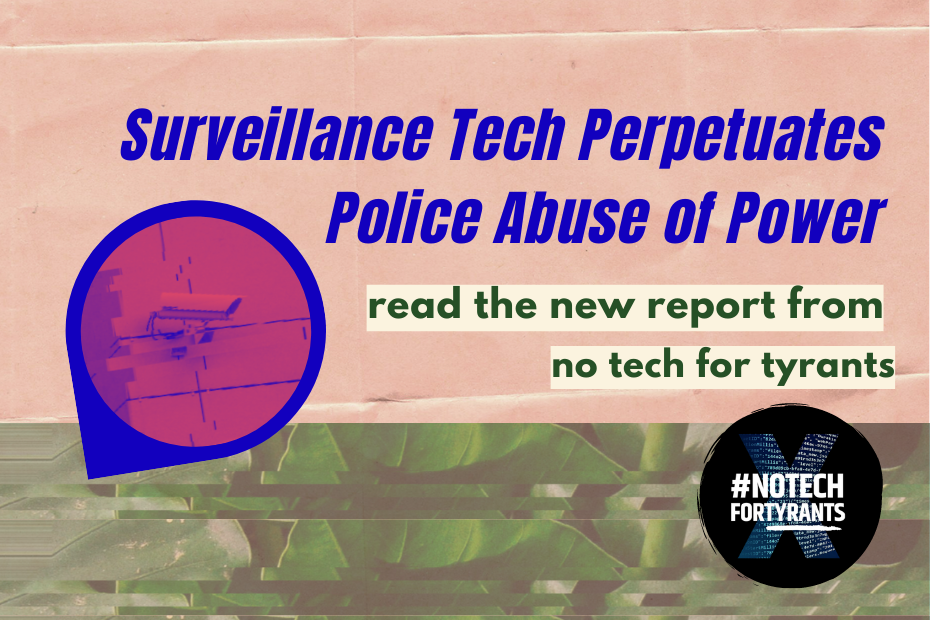 Among global movements to reckon with police powers, a new report from UK research group No Tech For Tyrants unveils how police use surveillance technology to abuse power around the world. Download the report and read more below.

Activist research group No Tech For Tyrants (NT4T) releases Surveillance Tech Perpetuates Police Abuse of Power, a new report unveiling how police use surveillance technology to abuse their power in the UK and globally. The report, to be launched at an online panel on 7 November, uncovers how surveillance technologies—including facial recognition, CCTV surveillance, and smartphone apps—facilitate police abuse of power in jurisdictions around the world. Breaking away from common framings of biased technologies or “bad apples”, NT4T calls on communities to reduce the power and resources of the police.

Shaped through collaboration with researchers and activists in the UK, US, Mexico, Brazil, Denmark and India, the report examines seven recent cases where police use of surveillance technology facilitates and perpetuates an underlying pattern of abuse of power.

Ahead of the report launch, a member of NT4T said “Police use of technology exacerbates abuse – continuing longer histories of racism, sexism and colonialism in policing institutions around the world. Our report highlights how the recent rise in adoption of advanced technologies has created a dangerous environment where police can assert control or authority on a much larger scale. This report urges the public to move away from framing police abuse of surveillance technology as isolated incidents or problems of technological bias, and calls for political action that moves us towards a world without police. We call on researchers, technologists, and civil society groups to act in line with our findings and divest from surveillance technology and policing.”

About No Tech For Tyrants

No Tech For Tyrants (NT4T) is a UK-wide collective severing the links between the university, violent technology companies, and hostile immigration environments. NT4T organises, researches, and campaigns to dismantle the violence infrastructure at the intersection of ethics, technology, migration governance, and surveillance. Previous work includes campaigns against Big Tech recruitment at UK universities and the research report “All Roads Lead to Palantir: A review of how the data analytics company has embedded itself throughout the UK”, authored with Privacy International. Follow NT4T on Twitter @notech4tyrants.