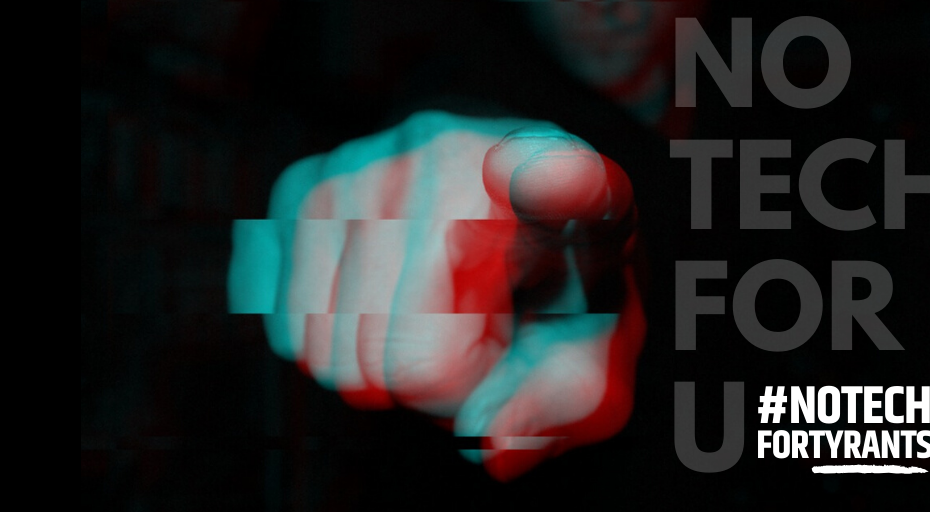 Today, NoTechForTyrants is launching our NoTechForU campaign, following our commitment to advance justice and anti-racism in the wake of the global outrage facing especially police departments, but also countless other types of law enforcement authorities across the world.

White supremacy grows in the dark, and while a lot of the violence facing Black, POC, LGBTQ, and vulnerable migrant communities has never been more blatantly obvious, agents of racial violence are amplified in their pursuit of injustice through experimental, invasive, and unchecked technologies. Ours is a campaign rooted in unveiling the tools weaponised by law enforcement agencies in carceral, disciplinary and surveillance activities.

Over the next weeks, NT4T will publicise several key companies (suppliers) and organisations (buyers) who have been engaged in technologically-enabled forms of racialised violence. The campaign draws attention to the especially sophisticated tools deployed, currently and historically, in the United States to surveil and detain black and undocumented immigrant communities, and crackdowns on protests. We will call attention to how these technologies are exported, enhanced, and repurposed here in the U.K., and beyond.

Ours is a hostile environment that is facilitated not only by xenophobic, racist and discriminatory policies but made permissible and further augmented by an economy of violence that goes beyond the borders of the U.K.

In carrying out our campaign, our objective is to first and foremost stand in solidarity with George Floyd, Breonna Taylor, Ahmaud Arbery, and the countless others whose lives were taken by agents of racial violence and terror. In carrying out our campaign, we stand against actors whose profits rely on the dehumanisation, subjugation, surveillance, datafication, incarceration and murder of racialised people.

Secondly, we aim to bring to the attention of our immediate community of higher education institutions (HEIs) –– especially in a time when many of them are reiterating their commitment to anti-racism –– their obligation to sever links with afore-mentioned companies and organisations, who are often housed at HEIs for research and development activities, as well the recruitment of tech workers.